The Smurfs head to the big screen 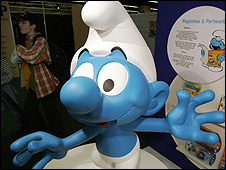 Classic children's cartoon characters The Smurfs are heading to the big screen for their 50th anniversary.

Studios Columbia and Sony have scooped the film rights to the original 1958 Belgian comic book series - which later became a TV show.

The as-yet-untitled film will combine live action and animation.
Posted by A Z Lynch at 6:58 AM