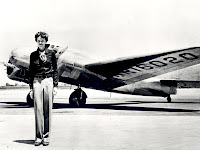 Eighty years ago this week on June 18, 1928, Amelia Earhart became the first woman to fly across the Atlantic as a passenger aboard a Fokker tri-motor aircraft that was piloted by Wilmer Stultz and Louis Gordon.

This image shows Earhart standing in front of the Lockheed Electra in which she disappeared in July 1937. Born in Atchison, Kansas, in 1897, Earhart did not begin flying until after her move to California in 1920. After taking lessons from aviation pioneer Neta Snook in a Curtiss Jenny, Earhart set out to break flying records, breaking the women altitude records in 1922.