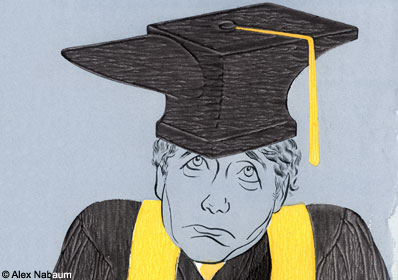 Mindy Babbitt entered Davenport University in her mid-20s to study accounting. Unable to cover the costs with her previous earnings as a cosmetologist, she took out a $35,000 student loan at 9% interest, figuring her postgraduate income would cover the cost.

Instead, the entry-level job her bachelor’s degree got her barely covered living expenses. Babbitt deferred loan repayments and was then laid off for a time. Now 41 and living in Plainwell, Mich., she is earning $41,000 a year, or about $10,000 more than the average high school graduate makes. But since she graduated, Babbitt’s student loan balance has more than doubled, to $87,000, and she despairs she’ll never pay it off.