Evidence of the 'Lost World' -- did dinosaurs survive the end Cretaceous extinctions? 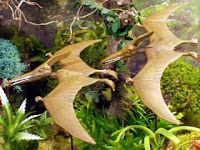 The Lost World, Sir Arthur Conan Doyle's account of an isolated community of dinosaurs that survived the catastrophic extinction event 65 million years ago, has no less appeal now than it did when it was written a century ago. Various Hollywood versions have tried to recreate the lost world of dinosaurs, but today the fiction seems just a little closer to reality.