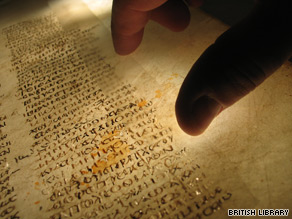 The New Testament books are in a different order, and include numerous handwritten corrections -- some made as much as 800 years after the texts were written, according to scholars who worked on the project of putting the Bible online. The changes range from the alteration of a single letter to the insertion of whole sentences.

Wikipedia entry for Codex Sinaiticus
Posted by A Z Lynch at 6:07 AM